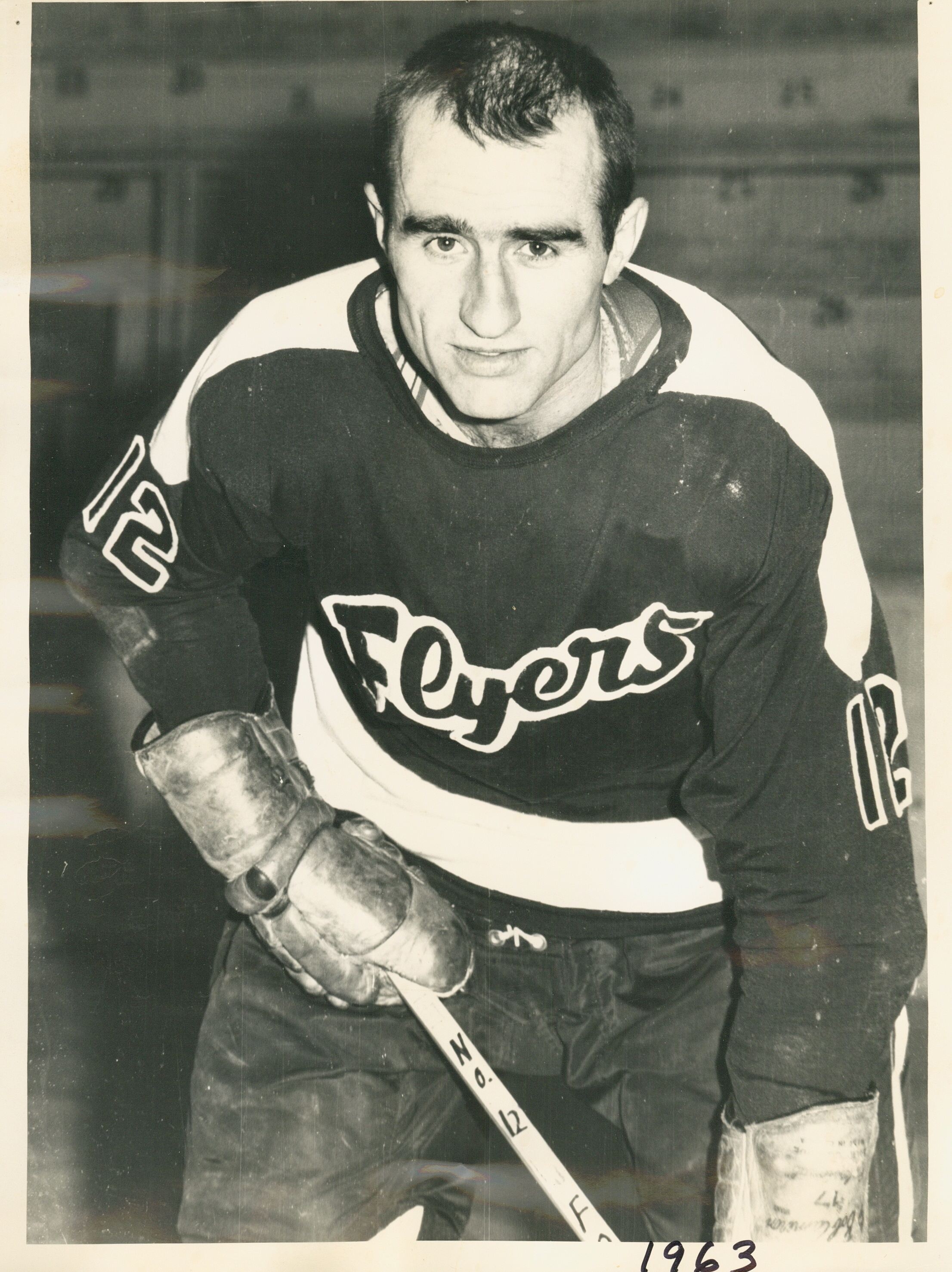 Throughout his life, his hockey career as a player and player-coach took him to many different towns and cities in Alberta and BC and the US. His personal hockey achievements and awards are certainly worthy of recognition and his hockey skills helped many teams to championships. He was a prolific scorer and in his career, he won five league scoring titles, was named MVP four times and voted onto All-Star Teams and Most Popular Player a number of times. His most outstanding personal achievement was scoring 50 goals in 39 games with the Red Deer Rustlers in 1958-59. Teams Rod played on won 22 League and Conference Championships, two Provincial Championships, two Interprovincial Series and a Western Canada Championship. Rod played hockey for more than five decades and retired in 1996. Even though he wasn’t playing he was still part of the hockey scene in his home of Fort St. John as he served on the board of directors of the Fort St. John hockey club until he passed away in 2017.

Rod played on the Medicine Hat Tigers Junior A Hockey Club for the 1951-52 and 1952-53 season. When he was 21 and finished Junior Hockey, Rod began play at the Intermediate Hockey Level with the Ponoka Stampeders of the Central Alberta Intermediated Hockey League (CAHL). That year (1953-54) the Stampeders won the CAHL and lost to the Trail Smoke Eaters in the Interprovincial Playoffs. The next season (1954-55) the Stampeders again won the CAHL, the Provincial Intermediate Championship, the Interprovincial play-offs and were runners-up in the Western Canadian Championships. In 1955 Rod was hired as Supervisor of Hockey in Wetaskiwin as well as the Player-Coach of the Wetaskiwin Colonels. The Colonels were not competitive that year, however, the forward line of Ron Emmerling, Gerry Kaiser and Rod was the most dominant scoring line in the league. Rod’s play was outstanding and he was the leading goal scorer of the league scoring as many as 5-6 goals and 2-3 assists per game.

Rod’s semi-pro and pro hockey career began in the 1956-57 season when he played nine games for the Washington Lions of the Eastern Hockey League. In 1957-58 he played three exhibition games with the Seattle Americans of the Western Pro Hockey League. When he was cut from the team Rod finished the 1957-58 season with the Red Deer Rustlers of the CAHL and helped the team win the League Championship. In the Western Allan Cup Finals, the Rustlers were runners-up. In 1958-59 Rod again played for the Rustlers and they won the CAHL Championship, the Provincial Intermediate A Championship, the Interprovincial Series and the Western Canada Intermediate Championship. That season Rod won the league scoring title and was the dominant player on his team scoring 50 goals in 39 games. In 1959-60 Rod played for the Milwaukee Falcons of the International Hockey League. Rod played 55 games with the Falcons, scored 14 goals and accrued 28 assists. In 1960-61 Rod returned to the CAHL and played with the Red Deer Rustlers.

1961 saw Rod move to northern BC where he became the player-coach of the Senior Intermediate Fort St John Flyers Hockey Club of the South Peace River Conference. It was here that Rod would spend the rest of his life immersed in hockey and become the “Face of the Fort St John Flyers”. In 1961-62 under Rod as coach the Flyers won their first league championship. Rod continued as player-coach for the next 11 years. During Rod’s tenure as player-coach the team won eleven South Peace Championships and seven All Peace championships. After Rod stepped down from coaching he continued with the Flyers as a player. As a Flyer Rod scored over 300 goals, won three consecutive scoring titles and was awarded two league MVP honors.

After retirement from playing with the Flyers, Rod continued to play Fort St. John Old Timers Hockey and at times he also played with the Wetaskiwin Relics at various national and international tournaments. Rod played hockey until he was 66 years old, “tying up his skates” in 1998. Besides serving on the Fort St. John Flyers’ Hockey board of directors for over 50 years, Rod spent some time as arena manager for the Fort St. John Recreation Department.

Rod Fonteyne spent his life engaged in a sport he loved. At times Rod was very close to being on the path to a sustainable pro-hockey career but this did not happen. However, his hockey career was extraordinary, remarkable and very deserving of recognition.