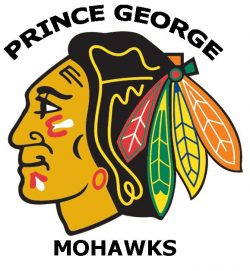 The new and improved Prince George Mohawks haven’t had many opportunities to show they are a better team than they were last year.

Two lopsided wins on home ice over the Penticton Vees and a split of a two-game series in Fort St. John against the defending Allan Cup-champion Flyers are the extent of the city’s triple-A senior hockey team game action this season.

But with Savage Cup provincial playoffs looming less than a month away in Fort St. John, neither the Flyers nor the Mohawks have much time to prepare for a playoff run they hope will take them to the Allan Cup national championship in Kenora, Ont., April 11-16.

No better time than the present to whip those two teams into a frenzy.

The Mohawks host the Flyers in a two-game series at the Coliseum tonight (8:30 p.m.) and Saturday (7:30 p.m.), and there’s plenty at stake. A sweep by the Flyers would give them a surge of momentum, knowing they will be playing on home ice the next time the Mohawks try to disrupt their provincial title plans. If the Mohawks win both nights, that might be all they need to convince themselves they are the best team in B.C.

“We will be able to get most of our players into the lineup on Friday and Saturday and we need the experience of games like this because we have only one more weekend against Penticton before Savage Cup,” said Mohawks coach Grant Williams.

The Mohawks have games against the Vees set for a week from Saturday in Summerland and the following Sunday in Kamloops.

The Mohawks were revived last year after being mothballed for 25 years. The fact they don’t have a lot of recent history behind them and don’t have league games to generate income (as do the Flyers, who compete in the North Peace Hockey League) puts the Mohawks’ finances on shaky ground. Needless to say, Williams is hoping the Coliseum bleachers will be full.

“Artistically and financially, we have to get a big crowd so we can pay some bills,” he said. “We had great games in Fort St. John last month (the Flyers won the first game 4-3 and Prince George took the second 3-1) and they will have their full team here this weekend so it should be good hockey.

“The one difference between senior hockey and junior hockey is that over time the fans will be able to identify with our players because they are all guys from our community. They are people you work with or live beside, guys you run into every day.”

“This year we’re younger, faster and better conditioned and that hopefully is going to cause Fort St. John some problems,” Grant Williams said. “They obviously have the edge in experience and size and I think it will come down to goaltending.”

The Mohawks have the choice of three goalies — Guy Walch, Alex Wright and Lyman Miller. Expect Clayton Pool, the former Kamloops Blazers goalie, to make the trip to Prince George from his home in Abbotsford. The Flyers also have goalies Troy Hunt and Ryan Bjorklund of Prince George on the roster.

One player to watch for the Flyers this weekend in forward Mike Stutzel. The former Spruce King played in the NHL for Phoenix and he’ll provide spice to a veteran lineup that includes Matt Shuya, Tyler Loney, Adam Loncan, Chris and Rod Stevens, Donny Lloyd and Kip Noble.