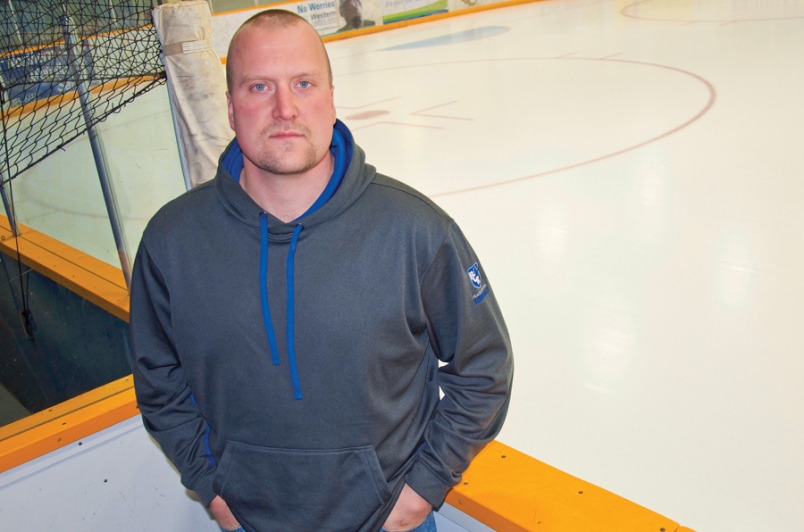 Tyler Loney played with the Fort St. John Sr. Flyers for a decade before deciding to hang up his jersey late last month. Hockey remains a part of his life, however, as he moves into coaching his children in the game. – Bronwyn Scott Photo

Thinking back on winning championships, the Coy Cup and, most of all, spending time with his teammates made it difficult for Tyler Loney to announce his retirement from the Flyers earlier this month in order to focus on coaching.

The 32-year-old defenceman has played with the Flyers for a decade, and he’s been skating alongside some of his teammates, like Jeff Fast and Bryan Lewis, since he was five years old.

“It was a hard decision, because I’m done now. So I think the biggest thing is, you don’t see those guys anymore, in the dressing room and times like that with them,” Loney said in an interview.

“I hummed and hawed over it for a little while, but I knew it was time.”

The club announced his decision on Fri., Dec. 2, and explained that Loney was turning his focus to coaching his two boys Cowyn, 10, and Quinten, 8, who play for Integra Tire.

“I guess you call it that ‘edge’ or whatever, you lose a little bit of that, and you just don’t quite have the desire there. I was realizing that, and my priorities are the things that I enjoy, and I enjoy being on the bench coaching a lot more than I enjoy playing the game,” Loney said.

Born and raised in Fort St. John, Loney grew up in a family of skaters. His older sister was a figure skater for “quite a few years,” he said, and his younger brother played for the Flyers as well. His parents were very involved in the hockey scene, and his father sometimes coached.

He remembers growing up on the ice, often at outdoor rinks around the city, at Bert Ambrose, and at the outdoor oval where the Pomeroy Sport Centre now sits.

“We did that quite a bit when we were younger . . . we used to play on the oval quite a bit. There was just a little rink beside the oval too, a little square or rectangle or whatever, a little hockey rink, and we’d spend a bit of time out there,” he said.

Loney’s passion for hockey has rubbed off on his boys. His stepson Austin Crossley now plays for the Prince Albert Raiders in the Western Hockey League, and his two younger boys will miss spending time in the Flyers’ dressing room after their father’s games.

“Definitely I think the middle boys were a little bit disappointed. They still want to go to the rink all the time and go down to the dressing room,” Loney said.

Those are times he’ll miss, too. When he started with the Flyers, his oldest boy Austin was just six years old. He used to spend time with the Flyers in the dressing room, too, and he’s now 17.

There are a lot of good times to remember.

“We won some pretty neat championships too with that team, and some that may or may not ever be won with that team again, at the Triple A level, that was a lot of fun,” said Loney.

Loney’s last game was against the Spirit River Rangers on home ice Nov. 24. It went to a record 14-round shootout, with the Flyers winning 5-4.