Fort St. John head coach is flying away from the Flyers 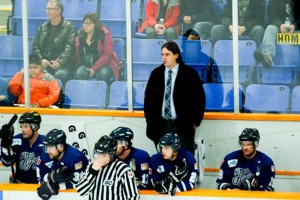 FORT ST. JOHN – After two years, a local hockey coach is trading in his playbook for something a little more playful.

Gerard Dicaire has stepped down as head coach of the Fort St. John Senior Flyers Hockey Club  in order to spend time with his family and also focus on growing work commitments.

“[The] decision to leave  was just [because] my daughter turns five here  in October so she wanted to start playing hockey this year and, you know, I’d like to be involved in that and helping her out and my parents were always involved in my hockey growing up,” said Dicaire.

He explained that he wanted to be able to show her tricks and help her learn the basics just as his parents showed him. Dicaire said that being with the Flyers helped hone his coaching skills and because oof his leadership, he led the team to a victory in March when, for the first time in almost 60 years, the Flyers won the 2014-2015 BC Hockey Senior AA Coy Cup championship.

Dicaire explained that although he will miss the team, it was the right move made at the right time.

“Walking away from the Flyers, it was a tough decision, I mean I enjoyed being around the guys and I enjoyed teaching and everything but my thoughts are if I’m not there 100 per cent of the time, you know, to give a full effort…it’s not really fair to the guys to come in and teach one thing and then have somebody else there teaching them something else,” he added.

Dicaire, who had a professional hockey career playing in the Tampa Bay farm team system in the American Hockey Association (AHL), returned to Fort St. John in 2006, to play on the Flyers team. He said that after his body wouldn’t allow him to do the things it once could, the player threw his name into the proverbial ring, or rink as the case may be, in order to be considered for the position of coach.

He said that during his tenure with the group, it taught him patience and he enjoyed the team because they were a younger crowd between the ages of 21-34. Although it could be challenging at times because of the  players’ life commitments he said it was a great experience and looks forward to the next phase of his life.

“It’s disappointing to see him go but I completely understand, I know how people’s lives and worlds change and that (moving on), you know, is part of it,” said Paul van Nostrand, president of the Fort St. John Flyers Hockey Club.

The team is a Fort St. John institution, having been started in 1958. Van Nostrand explained that the age group,which is 21 years and over, have given sports fans plenty of exciting action in its  57 year long history. He said that now they are without a coach they are looking for someone to fill the gap and are hoping that they will find one at the end of the month.

Anyone wishing to apply for the position can contact Lee Hartman, the club’s general manager at 250-261-9865 or email a.lee.hartman6@gmail.com.