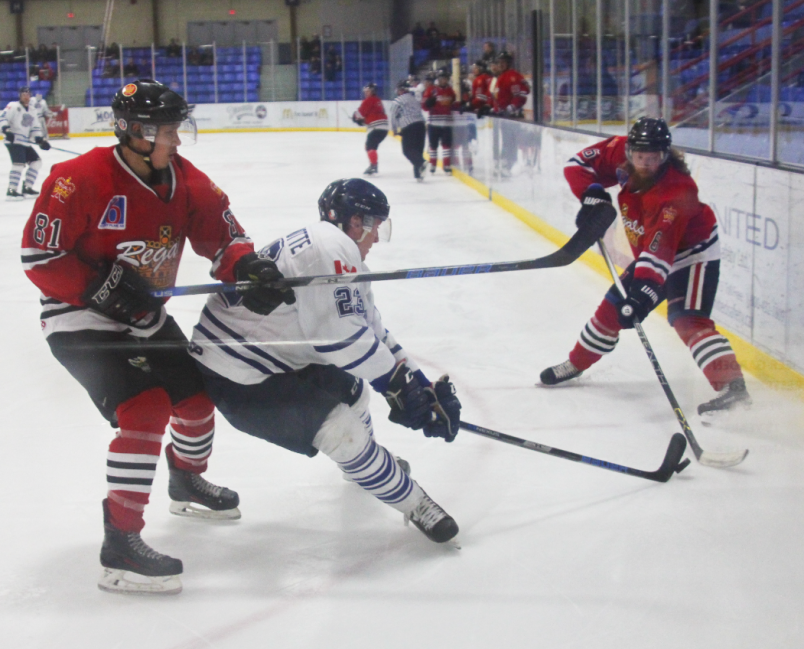 Lien Miller-Jeannotte battles for the puck against the High Prairie Regals in the Flyers 12-2 blowout victory Dec. 16.

A quick look at the standings from both the current NPHL season and the 2016-17 one would show that 2017 has been pretty kind to the Fort St. John Sr. Flyers. And while that may be true, the year was not without some pretty big disappointment.
Presently, the Flyers are once again on top of the West Division, and the entire league, with a 9-3 record. Since getting whooped by the Dawson Creek Sr. Canucks 6-0 on Dec. 7, the Flyers have reeled off three straight wins to go into the holiday break on a high note.
“Winning always brings confidence. Last night was a big boost for us,” Flyers head coach Andrew Leriger said about his team’s 5-4 overtime victory over Manning Dec. 15.
“We were down 4-2 with seven minutes left, and we came back and it was good for morale. Nothing ever hurts when you’re winning.”
The game was even more crazy in that the Flyers had 77 shots on net, compared to Manning’s 23. But last year’s NPHL goalie of the year, Braden Gamble, stood on his head, and was only beaten by a Rick Cleaver penalty shot in overtime.
“We’ve never played against him when (Gamble’s) been in all honest good. We’ve always had success against him, but last night he was unbelievable,” Leriger said.
The Flyers used that momentum to crush a High Prairie Regals squad 12-2 Dec. 16. “Our guys did what I asked them to do, keep it simply and they got results,” Leriger said about the win over High Prairie.
The Flyers are situated for a strong run at the NPHL playoff championship and Coy Cup title. But the team was in the same position just under 12 months ago and came up short.
The Flyers came into January 2017 atop the West Division, and would finish that month on top of the league, winning the Lawrence Cup for being the best team in the NPHL regular season. But like previous years, the wheels came off for the Flyers in the playoffs.
“I thought we played over our heads, winning games we shouldn’t have won. We progressively in my mind got worse,” Leriger said.
“Our guys were not showing up in practices, and expecting to just go out and win but it doesn’t happen.”
Indeed, that’s how things played out. While the Flyers took care of the fourth place Sr. Canucks handedly, winning the first round playoff matchup four games to one, the Flyers fell to the third place Spirit River Rangers four games to one in the next round.
The Rangers then went on to sweep the Falher Pirates and win the NPHL championship for the fifth straight season. This year, the Rangers are not in the league.
While it was an unfortunate end to the 2016-17 season, the Flyers did receive recognition for their good play. Rick Cleaver was the NPHL MVP, Leriger was the coach of the year, and Adam Horst was named both centre of the year and playoff MVP.
The Flyers headed into the 2017-18 season determined to be better, but once again faced some adversity.
“This year was a slow start for us, we start 0-2 and our guys aren’t used to losing two in a row. A little panic set in among the veterans … and we’ve worked our way up,” said Leriger.
Cleaver is once again leading the league in scoring with 27 points and 17 goals, six points ahead of the next closest player.
The current Flyers have had to deal with injuries to Horst, Reid Campbell and Jake Ebner, to name a few, as well as losing ice time to the World Under 17 Hockey Challenge, but the team has persevered, and heads into 2018 in a good spot.
“Now the seriousness gets started. I’m excited about January, it’s a very busy schedule for us. Guys will have to be on their game,” Leriger said.