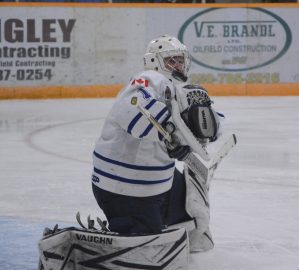 PreviousNextFort St. John Flyers goalie Troy Hunt made 27 saves in an 8-5 win as the team honoured him for his ten plus year career with the organization. – Byron Hackett
The Fort St. John Senior Flyers got tired of scoring all the goals Saturday night, so they gave up a few.

While the Flyers pulled out an 8-5 win over the Falher Pirates at North Peace Arena on Troy Hunt night, it wasn’t without some drama.

After only one goal in the first period, the home side broke out with five in the second and carried a commanding 6-1 lead through 16:39 of the period. The breakdown came in a wave with three quick Pirates’ goals, and head coach Andrew Leriger said the squad started thinking about a stat stuffing night.

“They’re tough games to have. At the end of the day when you get up 6-1 everybody is thinking about goals, D-men are pinching,” he said. “They’re a good team, we got a few goals on them and capitalized. But they didn’t quit.”

It was a quick refocus in the dressing room when the Pirates brought the game to 6-4 after two and Leriger once again credited the veteran lineup for righting the ship.

“As a team, stop thinking that it’s stat night, because it’s not,”Leriger said. “We are a team that prides ourselves on taking care of our own zone first. They stopped thinking about that.”

Rick Cleaver and Brennen Giroux scored twice on Saturday, Robbie Sidhu, Ryan Carter, Brady Busche, and Devan Greyeyes each added a goal of their own.

The Flyers power play now has six goals in the last two games.

Troy Hunt, who has honoured Saturday for his ten plus years of dedication to the organization didn’t have his best performance, allowing five goals on 32 shots. Hunt reached 100 wins in less than 150 games in the North Peace Hockey League last season and said the Flyers are like a second family to him and they keep him coming back to the rink year-after-year.

“It was pretty cool,” Hunt said about the pre-game ceremony. “I’ve never really had anything like that before. It was pretty cool to have the family involved. I really appreciate the organization recognizing my family because this is a huge family team. We don’t always get together to do stuff as family, but it’s a huge sacrifice for our wives and kids and extended family to let us do this.”

Hunt said looking back on those 100 plus wins, a few games in particular stand out, more so the firey days in the early years with the team.

“You always have your favourite games, when for a full 60 you are clicking. You remember them,” Hunt said. “In my earlier days, there were a little more fireworks involved than there is nowadays, so I have a few memories from 11, 12, 13 seasons ago that stick with me. Just the whole general feeling of being a part of this organization, we’re like a second family. It’s been awesome, I can’t stay away.”