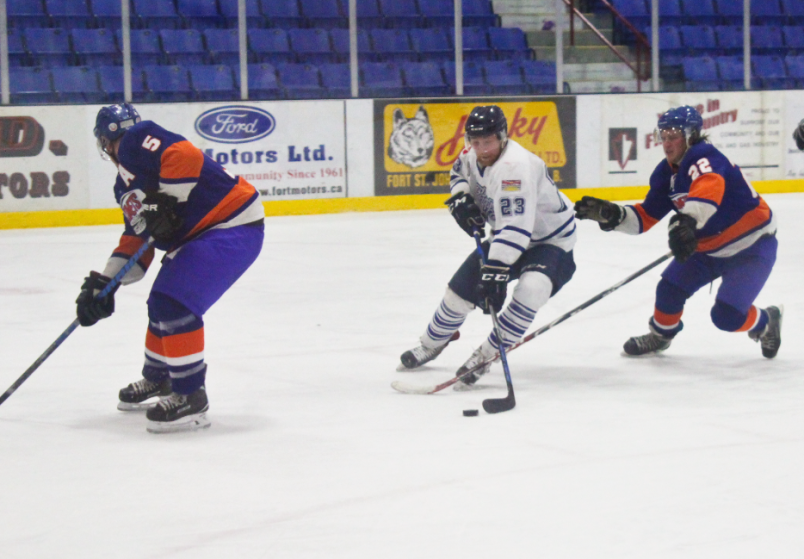 Flyers bounce back after bad loss, in second spot

Lien Miller-Jeannotte careens into the offensive zone against the Manning Comets on Dec. 9. The Flyers killed the Comets 7-1.
Photo By DILLON GIANCOLA

It was as if two different Fort St. John Sr. Flyers teams showed up last week. It started with a 6-0 shellacking by the Dawson Creek Sr. Canucks Dec. 7.
Head coach Andrew Leriger was very disappointed about the way his team played.
“We looked like a bunch of peewees out there. They (the Flyers) looked like they were disinterested.”
Leriger expressed frustration at his team’s work ethic.
“We have 28 guys signed. It starts with practice, when I can’t get more than 14 guys at a practice, until they get it figured out, there’s only so much I can do to help them,” Leriger said.
The next game, Dec. 9 against the Manning Comets, saw a much better effort by the Flyers, as Fort St. John won 7-1.
“Our compete level was a thousand times better than what it was against Dawson. We did good things and the guys looked a lot better,” said Leriger.
The win improved the Flyers’ record to 7-3-1, putting them in the West Division behind the Sr. Canucks.
The Flyers have two games this week before the Christmas break, in Manning Dec. 15 and at home against the High Prairie Regals Dec. 16.
Leriger said the message to the team this week will be to keep competing, and just show up.
“Just because we play Manning and High Prairie don’t blow it off. And then we have two weeks off, so show up and play hard.”
The Flyers have been hampered by a couple key injuries as of late. Jake Ebner returned and played two periods against the Comets. Adam Horst and Reid Campbell, out with a knee injury and rib injury respectively, are expected back in January.
The Flyers will be back in game action Jan. 6 in Grande Prairie.